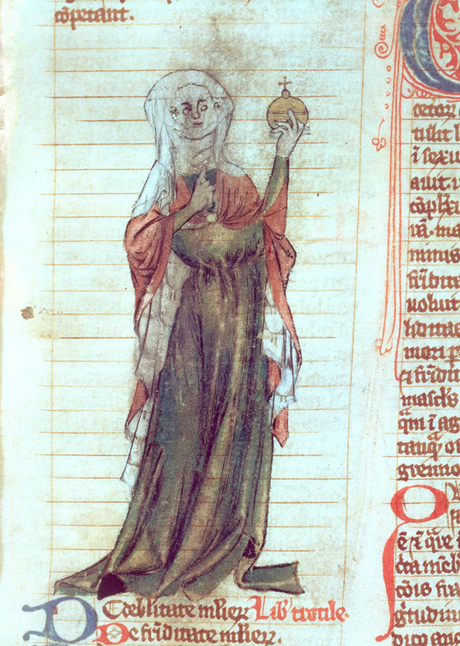 Trotula ensemble, Miscellaneal medica XVIII, Early 14th century CE, Archives
and Manuscripts supplied by Wellcome Library Trust, London Ms.544, folio 65
© CC BY-SA 4.0.
Trota of Salerno lived in the eleventh century at a time when European women were generally denied an education.  Trotula was a physician, instructor and medical writer, holding a chair in the school of medicine at the Scuola Medica Salernitana, a school that accepted women as both students and professors and was considered “the most important center for the introduction of Arabic medicine in Western Europe”.

The arrival of Constantine Africanus in 1077 marked the beginning of Salerno's classic period with their highest level of achievement encompassing the 10th to 13th centuries. The library of Monte Cassino, located relatively close to Salerno, provided an unrivalled medical source of knowledge having collected and translated Greek, Roman, Islamic, Egyptian, and European medical works.

Trota’s primary interest centered on women and how to alleviate their suffering.  She wrote several medical works, the most notable De Passionibus Mulierum Curandarum about women’s diseases, also known as Trotula Major. Another important work  was De Ornatu Mulierum about women’s cosmetics, also included in Trotula Minor, in which she teaches women to conserve and improve their beauty and treat skin diseases through a series of precepts, advices and natural remedies. She gives lessons about make-up, suggests the way to be unwrinkled, remove puffiness from face and eyes, remove unwanted hair from the body, lighten the skin, hide blemishes and freckles, wash teeth and take away bad breath, dying hair, wax, treat lips and gums chaps.

While it is known there were other women practicing medicine in Salerno she is the only woman known to have composed a written text.  A comparison of her work to her contemporary male practitioners indicates Trota did not speculate on the causes of diseases and tended to use locally available ingredients instead of newer ingredients like sugar.  She trained her students to observe their patients, examining them thoroughly in order to prescribe proper treatment, promoting cleanliness, a balanced diet, exercise and avoidance of stress.  She is considered the world’s first gynecologist and was a pioneer in women’s health, advising women on conception, pregnancy, caesarian sections and childbirth.

During the sixteenth century her two manuscripts entitled Trotula were published multiple times but humanist scholars came to believe the work was of ancient origin written by a man.  Her identity as a woman continued to be of doubt until recognition of the three-text origin of Troutula and the discovery of Trota’s original Practica occurred in the 1980’s, but her authorship of Treatments for Women was confirmed only as recently as the 1990’s.  Her work was so influential that it set the course for the practice of women’s medicine for centuries, doctors throughout the medieval world relying on her medical reference work to treat female patients.  Passionibus Mulierum Curandorum (The Diseases of Women) was a sixty-three chapter book first published in Latin in the twelfth  century and is still regarded as the definitive sourcebook for pre-modern medical practices.