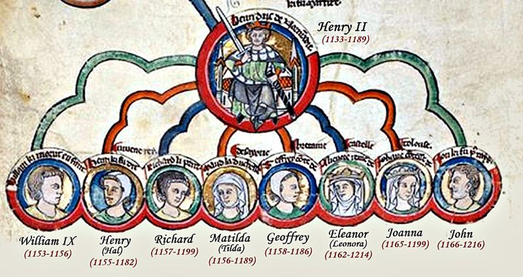 Daughter to William X, Duke of Aquitaine, consort to Louis VII of France, secondly Henry II, king of England.  Eleanor was one of the most powerful, influential figures with a far-reaching impact on western Europe during the High Middle Ages.  In 1137, her father William joined a pilgrimage to Santiago de Compostela dying unexpectedly on the trip.  On his deathbed, concerned about Eleanor’s safety, he expressed his wish to see king Louis VI of France as protector of his fifteen-year-old daughter and to find her a suitable husband realizing with her inheritance of his vast estate she would be the most sought-after bride of her generation.  Louis VI naturally accepted this guardianship and within three months the heiress of Aquitaine was married to his own son, Louis VII.
Within eight weeks after the annulment Eleanor and Henry were married and two years later Henry became king of England.  Throughout their marriage Eleanor continued to administer her own lands of Aquitaine.  In 1173, she gave full support to her sons as they rebelled against Henry and although the revolt was quickly suppressed and Eleanor was imprisoned for sixteen years.  In 1189, upon his father’s death one of Richard’s first acts as king was to release his mother from her prison.  That same year Richard joined the Third Crusade and Eleanor acted as queen regent during his absence.  In 1193, returning from the Crusades Richard was captured and held hostage by Henry VI, Holy Roman Emperor who demanded the astronomical ransom of 150,000 marks for his release.  Eleanor raised the ransom and in 1194 Richard was released.  In 1200, to solidify relations between England and France 80 year old Eleanor arranged a marriage between her granddaughter, Blanche of Castile and Dauphine of France.  Eleanor died in 1204 and was entombed in Fontevraud Abbey next to her husband Henry and son Richard. Her tomb shows her reading a bible  decorated with magnificent jewelry. By the time of her death she had outlived all of her children except for king John of England and queen Eleanor of Castile. Eleanor  is credited with establishing and preserving many of the courtly rituals of chivalry.  ​
Map of England and France 1152-1327