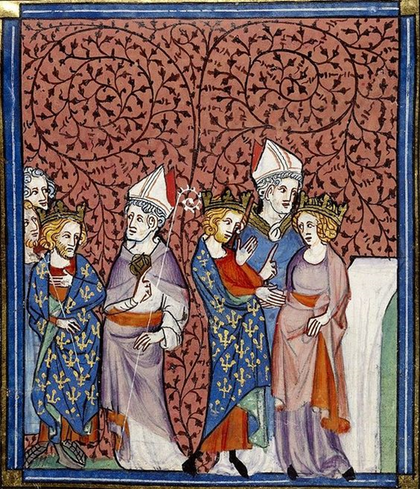 Daughter of Iaroslav I Grand Prince of Kiev and Ingegerd Olofsdotter of Sweden, consort to Henry I of France, grandmother to Isabel de Vermandois.    Brought up in a noble household with at least eight siblings, Anne was well educated, able to read and write in the Cyrillic alphabet, a writing system developed in the First Bulgarian Empire during the 9th century.  Many of her siblings married into European aristocratic families and after her offer of marriage was declined by the German Roman Emperor it appears king Henry of France’s attention may have been drawn to Kievan Rus.  Although their union would not provide any territorial gain for France it was a way for Henry to avoid violating papal laws of consanguinity and add validity to the young Capetian dynasty, also providing a tri-fold alliance between France, Poland and the Kievan Rus against a growing German empire.

In 1051, at the cathedral of Reims Anne and Henry were married followed immediately with her crowing as the queen of France.  At a year of marriage she gave birth to the heir to the throne, Philip I, given a Greek name from her Eastern Orthodox culture, a name new to Europe which meant  “loves horses”. In her roll as queen Anne was manager of the royal court and household, supervisor of the royal children and protector of churches and convents.  She was knowledgeable in politics and played an active role in government serving as an advisor to Henry and accompanying him on his inspection travels around France.  Pope Nicholas II, who was surprised with her great political abilities wrote her, "Honorable lady, the fame of your virtues has reached our ears, and, with great joy, we hear that you are performing your royal duties at this very Christian state with commendable zeal and brilliant mind."   Anne was respected by her husband, appointed a member of the royal council with several decrees bearing the inscription “With the consent of my wife Anna" and "In the presence of Queen Anna," unique among all other French Royal decrees.

On Philip’s seventh birthday he was co-crowned with his father.  A year later Philip assumed the monarchy with the death of his father at the Siege of  Thimert, the last military  action between Henry of France and Duke William II of Normandy.  Anne, as a member of the royal council, acted as Regent of France primarily for the first two years of Philip’s minority with County Baldwin V of Flanders as her co-regent in accordance with Henry’s will.  Although she was the first queen of France to serve as regent, the mother-son ruling relationship had precedents throughout the Merovingian and Carolingian dynasties.  She accompanied Philip on his inspection tours around France just as she had with Henry and was mentioned in eleven of the thirteen state documents Philip issued during his first year.

In 1062, Anne remarried Raoul, count of Crepy and Valois and, for a brief time, the governance of the kingdom and guardianship of her child went entirely to Baldwin.  Her remarriage has been presented as ‘a scandal that rocked the kingdom’ with theories of bride-kidnapping or Raoul rapidly snapping up Anne as ‘a great matrimonial prize’.  The right of consent in marriage had always been maintained by the medieval church and typically widows remarried within a year of two.  As a widow with influence at the royal court personal wealth and status of queen mother perhaps she chose to remarry to a man of her own choosing that would also provide political benefits to her son, namely, to keep Raoul, a powerful magnate who had once rebelled against her husband on her son’s side.  With her marriage she was forced to leave the court but returned after Raoul’s death in 1074.  Throughout Philip’s adult reign Anne appears to have maintained a good relationship with her son, occasionally witnessing charters.  She  founded an abbey about 1065 in honor of Saint Vincent in Senlis, where she held dower lands.  In the document Anne states how she was able to build the abbey ‘as a gift from my goods and those which king Henry, my husband, gave me at our marriage, all of which, with the favour of my son Philip, by the grace of God king, and the counsel of all the magnates of his kingdom, I granted to be assigned to it’.    She died in 1075, was buried at Villiers Abbey, La Ferte-Alais, Essonne.
Map of Europe circa 1000 AD