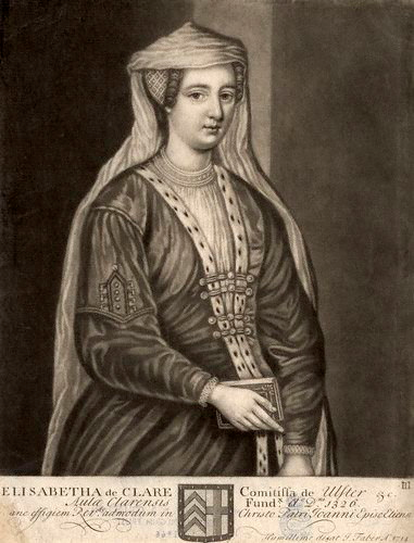 Daughter of Sir Gilbert de Clare and Joan of Acre, spouse to John de Burgh, secondly to Theobald de Verdun and lastly Roger d’Armory.  Heiress, niece to Edward II and cousin to Edward III, Elizabeth played a leading role in the society of her time.  After the unexpected death of her first husband king Edward had her placed in Bristol Castle with plans for her to marry one of his supporters when Theobald de Verdon, who had previously been engaged to Elizabeth, abducted and married her without the king’s consent, dying six months later from typhoid.  In 1317, twenty-two years after their father’s death, ten after their mother’s, the Clare inheritance was finally equally partitioned between Elizabeth the youngest daughter, who by then was married to Roger d’Amory, and her two sisters, Eleanor wife to Hugh Despenser the Younger and Margaret widow of Piers Gaveston, wife to Hugh de Audley.  The total valuation of the inheritance just over £6,500; her £2,000 inheritance coupled with the dowers she held from her first two marriages provided her an income comparable to the six wealthiest earls in England whose annual incomes were more than £3,000 .

During the 1322, rebellion known as the Despenser War her husband Roger, who had switched sides joining the Marchers Lords against Despenser and the royalist forces was captured, dying of his wounds.  Elizabeth legally viewed as the widow of a traitor was captured at Usk Castle and imprisoned at Barking Abbey with her three children, held under threat of death by her ambitious brother-in-law Hugh Despenser until she finally agreed to exchange her lordship of Usk with Despenser’s less valuable lordship of Gower.

Christmas that same year Elizabeth found herself again placed under arrest at York, forced to sign a bond not to marry or dispose of her lands without the King’s license,  when she ignored the bond Edward confiscated her lands and stripping them of their resources.  As a  widow and “femme sole” Elizabeth was entitled to run her household, manage her estates, and bring cases before the courts with more independence of action than an unmarried woman or wife yet continued to experience challenges as society expected medieval women to be weak, irrational and subordinate.  In 1326, Elizabeth, without either Edward or his lords knowledge, recorded a secret protest standing up for her family’s estates.  She welcomed the invasion of  Queen Isabella and Roger Mortimer although she was  careful to remain on good terms with Edward until sure of a successful invasion.  The following year her land rights were returned by the newly crowned Edward  III.

Elizabeth not only enjoyed a wealthy lifestyle filled with entertaining, travel and as a patron of the arts but gave generously to a convent of Minoresses, founded friaries in Ballinrobe and Walsinham and as a patron to the priories at Clare, Anglesey, and Denny Abbey.  Her most important and long-lasting endowment however was to Clare College, Cambridge.  Her twenty-two year involvement  began in 1346 when asked to support University Hall.  The Black Death of 1348-9 impacted 14th century with changes to both economic and social structure resulting in less land in cultivation, pressure to increase wage rates and unfavorable weather conditions impacting harvest years for the rest of the 1350’s.  Owing to the plague Elizabeth became concerned about the future of clerks at the college and decided to provide the means for not only keeping teachers but also bringing in poor boys of ability to be trained.  Giving land, money and drafting the statues whereby learning in all its forms were encouraged as a community of undergraduates, Master, fellows, and graduates she created an educational environment that became one of the principal beneficiaries in her will and would not be duplicated until almost twenty years later in 1379 when New College in Oxford was founded.
Map of Usk, Wales and Cambridge, England
​References and Further Reading
Proudly powered by Weebly