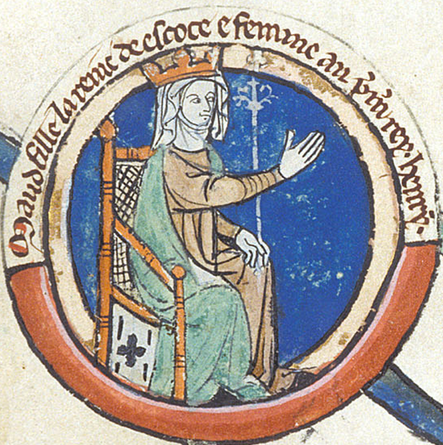 Seal of Queen Matilda, seal cast case 1, photographed with the kind permission of the Society of Antiquaries of London.
​Matilda (Eadgyth) of Scotland, 1079-1118
Ancestral Roots line 1:22

Daughter of King Malcolm III of Scotland and St. Margaret, consort to Henry I Beauclerc of England.   Her destiny was perhaps revealed at her baptism when the infant princess reached up and pulled at the royal headdress Queen Matilda was wearing, actually pulling it over her own head, perceived as a medieval omen she would also be a queen.  As a young girl she and her younger sister Mary were sent first to Romsey Abbey and later Wilton to be brought up and educated as many young Anglo-Saxon girls were, in a safe place of refuge often wearing a nun’s veil, a practice that seems to have emerged as an Anglo-Saxon effort to protect their young girls from “the eyes of the Normans”.

After extensive legal investigation to establish that Matilda’s intentions were never to take the veil but had only worn a nun’s veil as protection, she and Henry II were allowed to marry in 1100.   She became a trusted partner in Henry’s cross channel realm acting as vice-regal authority while he was in Normandy and a member of his royal council (curia regis) working with the King’s barons where major policy decisions were made and judgment charters issued on a wide spectrum of cases.  Matilda had the means to patronize ecclesiastical institutions of her choice and helped determine the direction of Henry’s patronage.  She commissioned at least two histories, a life of her mother Margaret written by a monk of Durham and enlisted William of Malmesbury to write in Latin an account of her ancestors of the royal house of Wessex serving as the foundation of his most important work, the Gesta regum Anglorum (Deeds of the English Kings), was completed after her death and presented to her daughter empress Matilda. 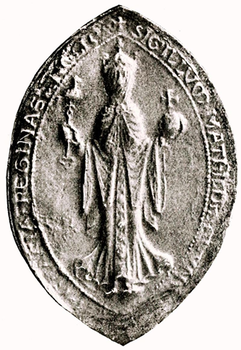 Seal of Queen Matilda, Society of Antiquaries of London, seal cast case 1.
Much of Matilda's energy and many of her resources had been directed​ towards improving London and bettering the lives of its inhabitants.  Both of the queen’s major foundations, St. Giles and Holy Trinity Aldgate, were located in or just outside the city.  In addition to the leprosaria, hospitals and religious houses, Matilda provided purely practical benefits for London.  She had great interest in architecture and instigated the building of many Norman-style buildings, including Waltham Abbey and Holy Trinity Aldgate.  Matilda paid for a large bathhouse that included London’s first public toilet facilities with piped-in-water and public lavatories. The queen also built several bridges linking London with the surrounding countryside.  One of these, Stratford-le-Bow was a three-arched stone bridge built over the River Lea, a rare engineering marvel unlike anything that had been seen before in England providing the major crossing between London and Essex well into the 19th century.  She displayed care and attention for the poor and sick while making sure her court was the home of musicians and poets.  ​
​Matilda died at Westminster Palace and was buried  at Westminster Abbey. After her death, she was remembered by her subjects as "Matilda the Good Queen" and "Matilda of Blessed Memory" and for a time sainthood was sought for her, though she was never canonized.  Matilda is also thought she may be the identity of the "Fair Lady" mentioned at the end of each verse in the nursery rhyme London Bridge Is Falling Down.   Matilda wrote often to Anselm, archbishop of Canterbury, while he was in exile with topics ranging from personal worries about his health and excessive fasting to political advise.  She also had correspondence from other bishops seeking or giving thanks her for patronage, a pope corresponding about the situation with the archbishop and an emperor about her mediations between him and her husband.
Map of England & France in the Reign of Henry I