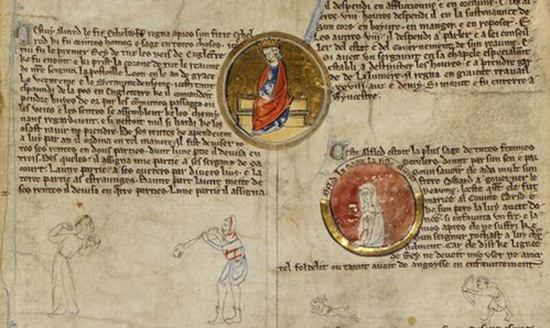 Genealogical Chronicle of the English Kings, King Alfred and his daughter Æthelflæd, Lady of the Mercians, ca. 13th century CE © British Library Board, MS Royal 14 B V folio l 2r.
​Æthelflæd, Lady of the Mercians, c 918, eldest daughter of Alfred the Great and Ealhswith who was from the ruling family of Mercia, sister of Edward the Elder, king of Wessex, wife to her kinsman Aetheled - Eldeorman of the Mercians. After the birth of her first child daughter Elswina, having suffered severely in childbirth, she made a vow of chastity.  By 902, Aetheled’s illnesses and incapacities resulting from years of fighting required Æthelflæd  to become more involved in political responsibilities and as a military leader devoting herself to arms becoming later know as “Lady of the Mercians”.

After Æthelred’s death in 911, Æthelflæd  ruled Mercia as “Lady of the Mercians” whose accession as a female ruler was most unique in early medieval history.  While the basic West-Saxon text of the Anglo-Saxon Chronicle downplays her role, the text incorporated in the Chronicle known as the Mercian Registers gives a competent survey of her achievements.  In 910, she began her policy of fortress-building and by 915 she had built ten.  The annals for 914 reads ‘In this year by the grace of God  Æthelflæd, Lady of the Mercians, went with all the Mercians to Tamworth, and built the fortress there in the early summer, and before the beginning of August, the one at Stafford’.
Often described as England’s greatest woman general playing a major role fighting off renewed Viking attacks she was praised by Anglo-Norman chronicler  William of Malmesbury, as ‘a powerful accession to [Edward's] party, the delight of his subjects, the dread of his enemies, a woman of enlarged soul’ who ‘protected her own men and terrified aliens’.   In her eight years in power Æthelflæd presided over the construction of a chain of fortresses across the kingdom, led troops against the Vikings, built forts, endowed churches, issued charters, dealt  with Irish-Norwegian pressures, received the submission of the men of York, established garrisons in Hereford and Gloucester, repaired the old walls of Chester, united Mercia and reestablished Tamworth as it’s capital.  Described as Britain’s greatest woman-general she was the military strategist and most brilliant tactician of her time and is “among the few English women who in any period have permanently influenced the course of history”.
Map of Kingdom of Mercia and Surrounding Kingdoms
​References and Further Reading
Proudly powered by Weebly