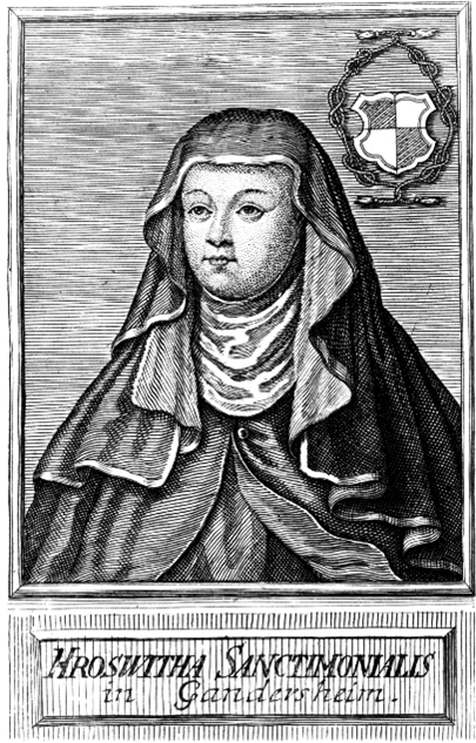 Portrait of Hrosvitha of Gandersheim., German authoress, writer, poetress, copper engraving, From Antiquitates Gandersheimenses page 271, by Johann Georg Leuckfeld, 1668-1726 CE, published in Wolfenbuttel Germany, by Gottfried Freytag, 1709 CE. Credit Alamy Photos
​Hrotsvit von Gandersheim, 930-973/1002.  Hrotsvit von Gandersheim is considered the outstanding female author of the early Middle Ages.  A German secular canoness who wrote eight metrical legends, comedies, histories in verse glorifying Emperor Otto, and six dramas, the only dramas composed in Europe from the 4th to the 11th centuries.  Her works feature the chastity and perseverance of Christian women developed around powerful young women who evade the sexualization of their female bodies as well as social domination in marriage by choosing a life as a virgin bride of Christ contrasted to the perceived Latin portrayal of women as weak and emotional.   Strongly aware that her gender made her less likely to be taken seriously in her contemporary society she stated she “put womanly weakness aside and summoned manly strength to her prudent heart”. Her name translated as "strong honor"  to which she re-interpreted as “a strong voice”.

Hrotsvit was a canoness of Gandersheim Abbey, an unusual nunnery which from its beginning maintained close links with the ruling Ottonian dynasty.  In 947, Otto I  invested the abbess of Gandersheim with supreme authority becoming an independent princedom with its own courts and army, the right to mint coinage, to be represented at the imperial court and to answer directly to the pope without episcopal interference. All the inhabitants except the servants were of noble birth with two classes of residents, nuns who had taken vows and the canonesses who preserved the right to retain their own property, have their own servants, buy their own food, could come and go, entertain guests, and might even leave to be married without incurring condemnation.

Gandersheim presents a striking example of the royal tendency in the early Middle Ages to encourage a  foundation of convents where women of royal blood might have a place where they could acquire an outstanding education and exercise power in intellectual surroundings.  The Abbey was the epicenter of learning in the region and its library housed an impressive collection of philosophical, theological and secular texts including classical Greek and Roman manuscripts.  Hrotsvit’s stories spanned the gap between the Roman period and the medieval mystery plays, with her strong voice she claimed authority for herself as a woman to write about women.
Map of Gandersheim, Germany circa 962