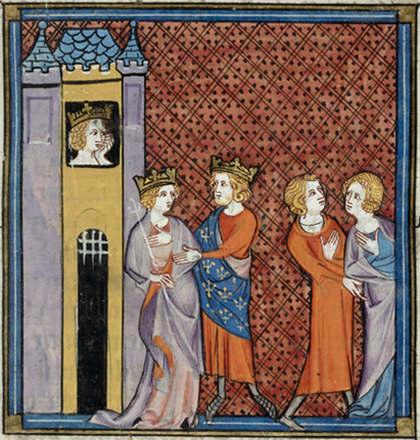 Daughter of Charibert I, Merovingian King of Paris, consort to  Æthelberht of Kent, married before 581.  Bertha was a daughter of a former king of Paris and of Christian faith whom Æthelberht  “received from her parents on condition that she should have freedom to hold and practice her faith unhindered” with Bishop Liudhard, who they had sent as her helper in the faith.  Although pagan, Æthelberht collaborated with Augustine in renovating an abandoned church, built during Britain’s Roman occupation, as a place for Bertha to pray.  Dedicated to St. Martin this church would become Christ Church Cathedral, the seat of the archbishops of Canterbury, the first church in England, oldest parish church in continuous use and oldest church in the English speaking world. 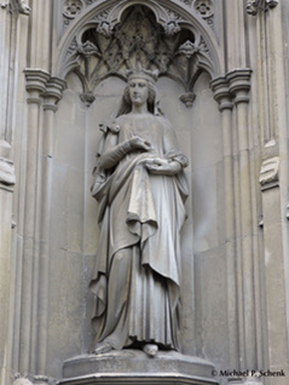 Statue of St. Bathilde at Canterbury Cathedral, Canterbury, England © Michael Schenk .
In 597, under the queen’s protection the Pope sent forty monks, including St. Augustine, to preach the gospel.  Æthelberht, with reservations, agreed to met Augustine and his companions a few days later in the open air on the Isle of Thanet where they had landed, taking precautions they should not approach him in a house in case they were “practitioners of magical arts.” As Augustine and his companions approached carrying a silver cross, singing a litany for the eternal salvation for both of themselves and to those whose sake they had come, bearing a likeness of their Lord and Savior, Æthelberht saw their sincerity and although he “would not abandon the age-old belief” that had held the whole of England together he received them and granted them dwelling in the city of Canterbury, which was the chief city of all his realm and “would not forbid them to preach and win any people you can to your religion.”  Occupying the house that had been given to them they began to emulate the life of the apostles, constantly in prayer; fasting and keeping vigils, preaching their message.  In time Æthelberht,  among many  others, “edified by the pure lives of these holy men and they gladdening promises, the truth of which they confirmed by many miracles” believed and were baptized.         ​
Accepting Christianity Pope Gregory sent a letter and gifts to Æthelberht “wishing to bestow earthly honours on the king who by his exertions and zeal, and to his great joy had been brought to knowledge of heavenly glory.”  Within a few years of the arrival of the missionaries, perhaps in 602-3, the king and his counsellors established a code of laws for the Kentish people, one of the first documents ever written down in the English vernacular, partly designed to integrate the fledgling church  and its property within the existing legal system.                                                                             ​
Map of Kent England