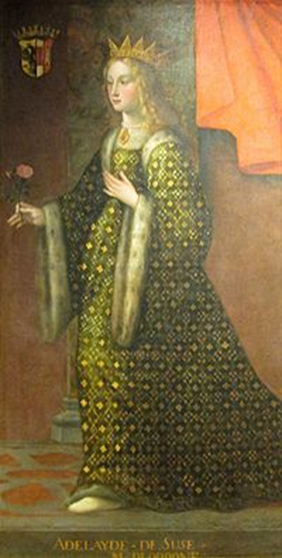 Daughter of  Odalirico Manfrido II margrave  of Turin and Bertha of Milan,  wife to Herman IV, duke of Swabia, secondly to Henry, margrave of Montferrat and finally to Odo I, count of Savoy.  Upon her father’s death the great margraviate was divided between their three daughters though the greatest part went to Adelaide which she retained control of through each of her marriages.  Adelaide was described as a beautiful woman with the soul of a lion having learned martial arts as a girl and bore her own arms and armor.  She had masculine courage and energy and knew how to rule her inheritance.  Her marriage to Odo in 1046 united a large territory on both sides of the Alps and it’s important Alpine passes resulting in control of the majority of northern Italy, making Savoy one of the most powerful houses of the empire.  After Odo’s death in 1060 Adelaide ruled first jointly with her sons Pietro I, died 1078, Amadeus II, died 1080, and finally alone until her death in 1091.

When Adelaide assumed the regency there was great controversy raging in Northern Italy concerning the obligatory celibacy of the clergy which had been discussed in several councils but never settled.  The church of Milan allowed married men to take orders and continue to cohabit with their wives unless his wife died and he chose to remarry, he could not then continue to exercise his office.  After a long struggle with bloodshed the married clergy of the church of Milan succeeded; the pope sending a legate to Adelaide in Milan followed with a letter from the pope expressing laudatory expressions of her piety and other virtues, witnessing her great power  as “mistress of a vast territory, situated between the kingdoms of Italy and Burgundy and comprising many episcopal dioceses” relying on her to enforce clerical celibacy and protect the monasteries of Fruttuaria and San Michele della Chiusa.   More than once she waged war on rebels in her territories, burning Lodi and other towns that had risen against her including in 1070 when the city of Asti rebelled against a bishop which she restored after capturing and burning the city. 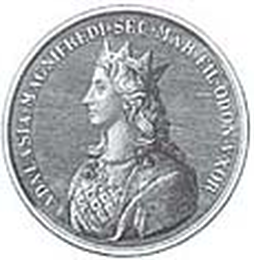 11th century coin, Adelaide di Susa,
unknown source
In 1074-5, Adelaide and her son-in-law Henry IV became involved in the “Investiture Controversy,“ the most important conflict between secular and religious powers and who had the ultimate authority in medieval Europe.  The dispute first began in the eleventh century between the Holy Roman Emperor Henry IV and Pope Gregory VII.  Henry continued, against numerous warnings, to name bishops at will declaring papal provisions illegitimate.  After he summoned a group of bishops and princes to declare Pope Gregory VII deposed Henry was excommunicated.  This was the first  excommunication by a pope of a king which was followed several  weeks later with the dukes confronting Henry with an ultimatum, ‘if he did not reenter the community of the faithful with a year beginning February 2, 1077, he would be replaced’.   Henry realized he had no choice but to have the excommunication lifted so he sought support from his mother-in-law Adelaide, who extracted “a very wealthy province of Burgundy” as payment for her support and allowing him to travel thru her lands to the meeting site.  Henry arrived late to discover Matilda of Tuscany and the pope had relocated to her castle at Canossa, a fortified castle on a summit with sheer rock faces.  Traveling on to the castle he arrived to closed castle gates where he reportedly barefoot in the snow begged and pleaded for three days seeking absolution which the pope finally granted after Henry vowed to comply with certain conditions, which were soon violated.  ​
Adelaide made donations to the monasteries of Turin, founded the monastery of Santa Maria at Pinerolo,  and received communication from many leading churchmen of the day.  She furthered ecclesiastical reform and like her second cousin Matilda of Tuscany and has been described as ”the last of a race of marchional dynasts.”  ​
Map of Turin & Susa, Italy