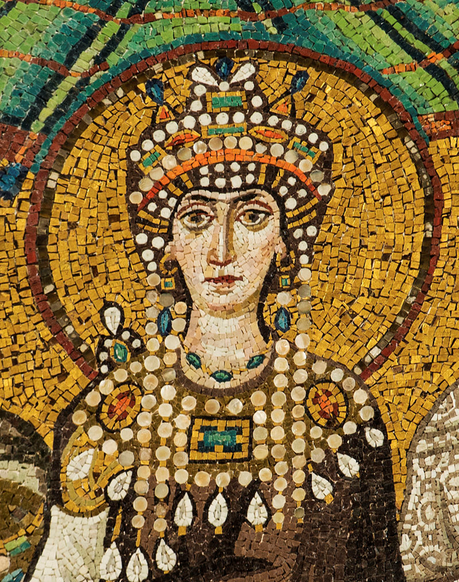 6th century, Empress Theodora , Mosaic from Basilica of San Vitale, Ravenna, Italy © Petar Milošević CC BY-SA 4.0.
​St. Theodora,  Byzantine Empress, 497-548, born to the peasant class whose father was the bear trainer at the Hippodrome.  After his death her mother unable to support her three daughters placed her daughters into society as “actresses”, an activity banned by the church.  Justinian, nephew to the Emperor, saw the beautiful Theodora at a bride show and fell in love with her.  He persuaded his uncle the Emperor to repeal the Roman law prohibiting marriage of the great officers of the empire to “actresses”.  In 527, two years after their marriage Justinian succeeded to the throne with Theodora co-ruler, empress of the Eastern roman Empire with her own court, official entourage and seal, and to whom Justinian referred to as “his partner in my deliberations.”

Theodora was probably the most influential and powerful woman in the empire's history exemplifying her strong will and determination during the 532 Nika riots which erupted at the Hippodrome and intensified into a week long siege, the most violent riot in the history of Constantinople with 30,000 rebels killed and almost half the city burned or destroyed including the city’s foremost church, the Hagia Sophia.  Unable to control the mob, Justinian and his councilors considered fleeing the city until Theodora interrupted their deliberations with a moving speech convincing them to stay and fight thus saving his throne. 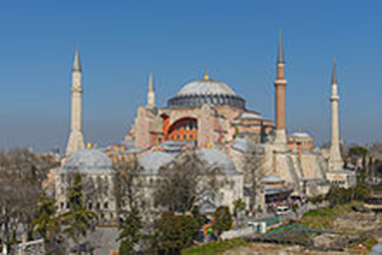 Built under the direction of Emperor Justin I in less than 6 years, inaugurated the new basilica in 537 CE, Hagia Sophia, Constantinople (now Istanbul) © Arild Vågen CC BY-SA 3.0.
Her unswerving will, superior intelligence, and acute political acumen enabled her sphere of influence to include administrative, legislative, and ecclesiastical matters. In the field of foreign affairs, she corresponded with and received diplomats and conducting any foreign policy that did not pertain to fighting battles.  She is remembered as one of the first rulers to recognize the rights of women, together passing strict laws to prohibit trafficking of young girls, changing laws on guardianship to include women, altered divorce laws to give greater benefits to women and allowed women to own property.  From 529-534 Justinian also directed rewriting the Roman law known as the Corpus Juris Civillis providing the foundation for the Western legal tradition. ​
After the riots destroyed the church Theodora and Justinian began rebuilding Constantinople into the most splendid city the world had seen for years.  Noble woman Anicia Juliana oversaw the creation of the Hagios Polyeuktos in 528 with its domed design and revolutionary architectural sculptural decoration.  Influenced and perhaps to outdo Hagios Polyeuktos the larger Hagia Sophia was built 532-37, a structure considered the epitome of Byzantine architecture whose massive dome “changed the history of architecture”. With it’s population of 500,000, Imperial Library containing remnants of the Library of Alexandria with over 100,000 ancient texts and guardian of Christendom’s most holy relics as the Crown of Thorns and the True Cross Constantinople was the largest, most advanced and wealthiest city in Europe. ​
In 980, Vladimir the king of Kiev (Olga of Kiev’s grandson) sent out teams to observe the major religions of the times.  The team reported “The [Byzantines] led us to the [buildings] where they worship their God, and we knew not whether we were in heaven or on earth. For on earth there is no such splendor or such beauty, and we are at a loss how to describe it. We only know that God dwells there among men, and…we cannot forget that beauty”. ​
Map of Eastern Roman Empire circa 565 AD
​References and Further Reading
Proudly powered by Weebly