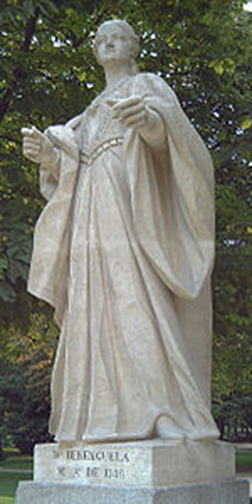 Oldest daughter to Alfonso VIII of Castile and Eleanor of England, granddaughter of Eleanor of Aquitaine, sister to Blanche of Castile, consort to Alfonso IX of  León.  Berengaria as the eldest child of king Alfonso and Eleanor was the heiress presumptive to the throne of Castile for several years.  In 1187, at the age of nine Berengaria became engaged to Conrad II, Duke of Swabia.  By 1191, she requested an annulment of the engagement from the pope but the duke’s assassination in 1196 finalized the situation.  In 1197, it was decided that Berengaria  should marry her father’s cousin Alfonso IX in an effort to bring peace to the two kingdoms of Castile and León.  After seven years of marriage and five children their marriage was voided by Pope Innocent II due to consanguinity with Berengaria returning to Castile and her parents where she dedicated herself to her children.

After her father’s death in 1214, Berengaria was regent for her younger brother Henry I of Castile until internal strife, instigated by the nobility, forced her to cede regency and guardianship to Count Alvaro Nunez de Lara.  By May 1216, the situation had grown so perilous she sent her son Ferdinand to the court of his father until June 1217 when her brother Henry was accidentally killed, hit in the head from a dislodged roof tile.  Castilian custom ordained the she would inherit the throne but fearing her former husband would try claim the crown she kept her brother’s death secret ,writing a letter to Alfonso to arrange for her son Ferdinand to come for a visit.

Recognizing Castile needed a military leader Berengaria abdicated to her son which united the two kingdoms of Castile and León.  As the king’s advisor, according to the Cronica Latina, her “total intent and desire being to procure honor for her son in every way possible”.  Berengaria’s political acumen helped quell the rebellious nobles and provided her son with crucial support in his crusade against the Muslims of Al-Andalus.

Perhaps Berengaria’s most important intervention on Ferdinand's behalf was in 1230 when his father Alfonso IX died designating his daughters from his first marriage as heirs to the throne, superseding the rights of Ferdinand III.  Berengaria met with the princesses’ mother and succeeded in the ratification of the Treaty of las Tercerías in which they renounced the throne in favor of their half-brother in exchange for a substantial sum of money and other benefits, thus reunited the thrones of León and Castile under her son Ferdinand III.

Chronicles portrayed her as a wise and virtuous woman, a powerful noble in her own right possessing a number of territories and castles in Castile and Leon and, in the  family tradition, founded the Cistercian female monastery of Las Huelgas, which would become the traditional resting place for Castilian monarchs.   She supported literature and the writing of a history including a chronicle on the Kings of Castile and León to aid and instruct future rulers of the joint kingdom and was a dominant figure on the political landscape of the kingdoms of Castile and Leon.  Berengaria was buried in the Royal Chapel of Granada.
Map of Spanish Kingdoms 1210 AD