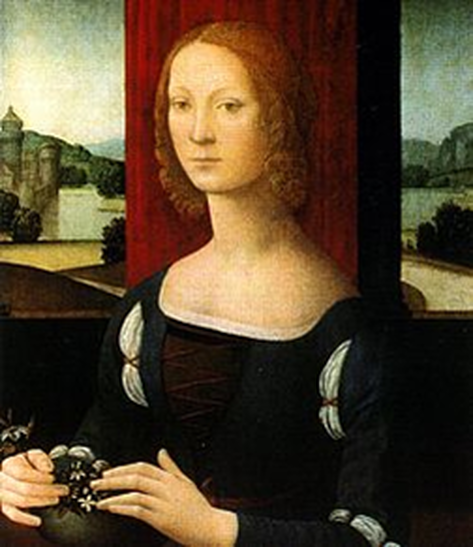 
Illegitimate daughter of Galeazzo Maria Sforza, Duke of Milan, spouse to Girolomao Riario (termed nephew but was possible son of Pope Sixtus IV), secondly to Giacomo Feo and thirdly to Giovanni de’Medici.  Caterina became one of the most famous members of the Sforza family and considered second only to Isabella d’Este as the most famous woman of the Italian Renaissance.  In a society where illegitimate children were treated as a family’s own she enjoyed a typical fifteenth century Italian childhood as a nobleman’s daughter, learning to read, write, educated in religious matters and considered a tool of diplomacy for politically advantageous marital ties.  The Sforza family rose to prominence as condottieris (captains of bands of mercenaries) and, unlike other noble families,  the female children were trained in the use of weapons and fundamentals of military leadership.  The Sforza women were no strangers to warfare and Caterina, owning her own steel cuirass engraved with the image of Saint Catherine of Alexandria, was one of a few women of the period described as “virago” (a woman possessing qualities the Renaissance associated with men: strength, standing, importance, force) who wielded sex, the sword, and diplomacy to secure her power, conducting  military operations and defending besieged fortresses in fifteenth century Italy.

In 1488, she and her six children were taken captive following her husband Riario’s assassination.  Unknown to her captors she had managed to send a message to the commander of her fortress at Ravaldino to not surrender, no matter what happened or what she said.  Her captors took her and her children to the fortress forcing her to demand surrender of the castle, the commander refused.  Caterina persuaded her captors if permitted to enter the castle she would be able to convince the castle’s commander to surrender; she was allowed three hours with a reminder that her children were hostages against her good behavior.  When time was up and she did not return the captors realized they had been duped.  Against threats of killing her children Catherine continued to hold the castle knowing her children were protected by the great power of her family.  Soon receiving the promised help from Milan and Bologna the captors were dealt with and Caterina became known as a brutal tyrant. She governed for twelve years as regent with a persona of widow, mother and triumphant regent, managing local and international conflicts through cunning diplomacy and strong defenses.

A woman believed to be Catherine Sforza as one of the three graces in Sandro Botticelli’s The Three Graces, Uffizi Gallery, Florence, Italy.
Her third husband Giovanni de Medici died after one year of marriage but she continued to rule her small lands until they were attacked in 1499 by Cesare Borgia, son of Pope Alexander VI.  Caterina and her force of 900 held the fortress against Borgia’s 16,000 for several days, managing to rebuild each night the damage incurred during the day until Borgia changed his tactics, relocating to the back and issuing the order for continual bombardment.  After six days overtaking the fortress was quick and decisive with Caterina fighting, weapons in hand until the fortress was taken and she a prisoner.  After inexcusable assaults from her captor she was held in Belvedere Palace at the Vatican for four months and then  relocated to Castel Sant’ Angelo for another year after a failed escape, only being released after she relinquished her lordship.  Caterina returned to Firenze with extensive damage to her health, dying eight years later.  ​
Throughout her life she promoted her own fame and power through cultural patronage and political avenues.  She was an amateur chemist making her own beauty preparations, played with alchemy and so charmed  Sandro Botticelli that he depicted her face in several of his paintings.  Her descendants include grandson Cosimo I best known for the creation of the Uffizi in addition to Marie de Medici, queen of France and Marie’s daughter Henrietta Maria of France, queen of England.  ​
Map of Forli, Italy
References and Further Reading
Proudly powered by Weebly