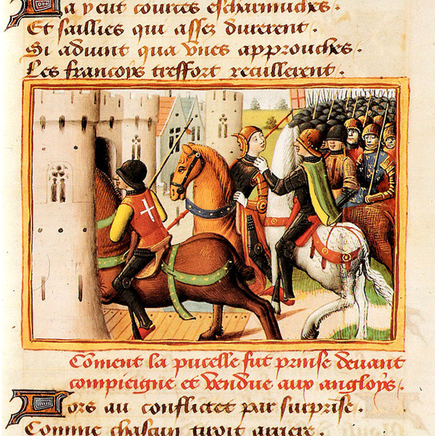 Joan’s capture at Compiegne, The Vigils of the death of Charles VII,
Martial d’Auvergne 1420 - 1508 CE © Bibliothèque nationale de France,
MS 5054, folio 70
St. Joan of Arc, 1412-1431, Daughter of Jacques d’Arc, never married, nicknamed "The Maid of Orléans" and is considered a heroine of France for her role during the Lancastrian phase of the Hundred Years' War.

Born in the village of Domreny in the Lorraine area of northeastern France her father Jacques d’Arc was a farmer of modest means and her mother Isabelle Romée, a pious women who taught Joan to say her prayers.  Joan grew up strong-minded and started seeing visions and hearing voices at about twelve.  At seventeen she received visions from Archangele Michael, Saint Margaret, and Saint Catherine of Alexandria instructing her to support Charles VII and recover France from English domination.

The uncrowned king Charles VII sent Joan, who had borrowed items of armor so that she could dress herself as a knight, to the siege of Orleans as part of a relief mission where she gained prominence after the siege was lifted in nine days.  Joan united for the first time the old religious faith and the new force of patriotism leading French troops to victory in a series of deftly directed attacks forcing the English to abandon their siege and retreat approach. During a morning assault at Les Tourelles Joan was wounded between the neck and her shoulder by an arrow, returning to the field near dusk to encourage the demoralized troops to in the final decisive charge that succeeded in taking the fortress which proved to be decisive as the English abandoned the siege the next day.  On May 23, 1430, Joan was captured by a faction of the Burgundian’s, allies of the English near Compiegne.

A description of Burgundian chronicler and poet Georges Chastellain (ca 1405/15—1475):
"Then the Maid [Joan of Arc], surpassing the nature of a woman, took on a great force, and took much pain to save her company from defeat, remaining behind as the leader and as the bravest of the troop. But there fortune permitted for the end of her glory and for the last time that she would ever carry arms. An archer, a rough and very sour man, full of much spite because a woman, who so much had been spoken about, should have defeated so many brave men, as she had done, grabbed the edge of her cloth-of-gold doublet, and threw her from her horse flat to the ground."

​In the 16th century, Joan became a symbol of the Catholic League and in 1803 Napoleon Bonaparte declared her a national symbol of France.  Joan was beatified in 1909, canonized in 1920, and is one of the nine secondary patron saints of France.
Map of Military Campaign of Joan of Arc
​References and Further Reading
Proudly powered by Weebly