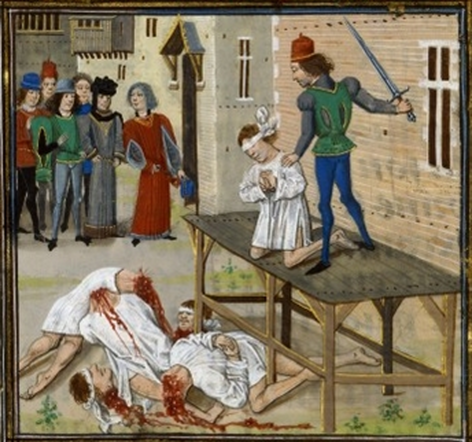 Daughter of Maurice IV of Belleville and Létice de Parthenay , wife to Geoffrey de Chateaubriant VIII, secondly to Olivier de Clisson IV.   Jeanne as a young widow of the lord of Chateaubriant controlled a group of lordships in Poitou just south of the Breton border, stretching from Beauvoir-sur-Mer in the west to Chaeaumur southeast of Clisson.  Four years after the death of Chateaubriant Jeanne married  Olivier III de Clisson becoming the leading seigneurial power in the marches with their combined holdings.

Olivier, as a wealthy nobleman held a castle at Clisson, a house in Nantes and lands at Blain.  In 1342, he joined Charles de Blois in the Breton War of Succession defending Brittany against the English claimants and the forces of English sympathizer John de Montfort. During the ensuing campaign, Olivier came under suspicion and criticism from Charles de Blois for failing to hold Vannes against the English forces so Clisson defected to the English side.  January 1343, the Truce of Malestroit was signed between England and France and under the perceived safe condition of this truce Olivier and fifteen other Breton lords were invited to a tournament on French soil.  While attending the tournament Clisson was arrested, taken to Paris, tried by his peers including his friend Charles de Blois and found guilty of treason.  On August 2, 1343, Clisson was executed by beheading at Les Halles on the orders of King Philip VI, Olivier's head was then sent to Nantes and displayed on a pole outside the castle of Bouffay where Jeanne took their two young sons Olivier and Guillaume to show them the head of their father .

Enraged and bewildered over her husband's execution and swearing revenge on the King and, in particular  Charles de Blois,  Jeanne  sold off the Clisson lands to raise money for a force to attack French forces.  She also outfitted three warships which she had painted black with sails dyed red to be known as the ‘Black Fleet’ and she began patrolling the English Channel as the ‘Lioness of Brittany’.  For thirteen years she hunted down and destroyed the ships of King Philip VI.  She was merciless with the crews but always left two or three of Philip's sailors alive so that the message would get back to the King that the 'Lioness of Brittany' had struck once again. Jeanne and her fleet also assisted in keeping the English Channel free of French warships and very likely, as a privateer, she had a hand in keeping supplies available to the English forces for the Battle of Crécy in 1346.  Jeanne continued to wreak havoc and revenge towards French shipping even after King Philip VI died in 1350.  It was reported that she took particular joy in hunting down and capturing the ships of French noblemen as long as they were aboard, personally beheading the aristocrats with an axe, tossing their lifeless bodies overboard.   In time her luck ran out,  during a storm at sea with her flagship sinking, she and her boys adrift in a small boat for about five days where her son Guillaume died.  Jeanne and her son Oliver were finally rescued making their way to Hennebont, the fortified port on the Blavet river and in due course later to exile in England.

In 1356, after 13 years of piracy, she married  Sir Walter Bentley, one of King Edward’ III’s military deputies, a lieutenant leading an Anglo-Breton force of 2,000 men to victory at the Battle of Mauron against the 5,000 strong Franco army.   Bentley received for service “the lands and castles” Beauvoir-sur-mer, of Ampant, of Barre, Blaye, Châteauneuf, Ville Maine, the island Chauvet, Noirmoutier and Boui Me.   Jeanne resided at the Castle of Hennebont which was in the territory of her de Montfort allies dying there in 1359.

Jeanne’s son Olivier V “The Butcher” was the only one of the five children to survive his parents fighting the War of Breton Succession and becoming Constable of France from 1380—1392.  In 1392, an assassination attempt was made on him thought to be instigated by John IV, duke of Brittany, son of Joanna of Flanders “Jeanne la Flamme”.  Oliver V became one of the richest people in Europe and probably the wealthiest man in France who was not of royal or princely rank.
Map of Clisson, Anjou, France
​References and Further Reading
Proudly powered by Weebly