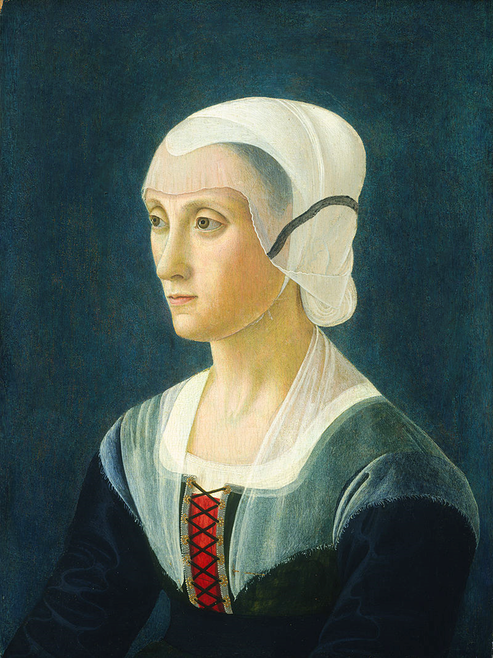 
Daughter of Francesco Tornabuoni, wife to Piero di Cosimo de' Medici- son of Cosimo de' Medici, a wealthy banker from Florence.  Connected by birth to two of the most powerful Italian 15th century families Lucrezia’s marriage to a third extended her own power and influence with significant political influence during the rule of her husband followed by the rule of her son Lorenzo the Magnficent.

Lucrezia was well educated and well read including many texts in Latin and Greek.  She brought considerable property to the marriage and since the properties were located beyond the city’s jurisdiction she was able to keep them under her own clever management, allowing her to remain a woman of independent mind as well as means.  When her husband Pietro whose health kept him confined to bed took over the faction dominating republican Florence in 1464 their bedroom was transformed into something resembling a noble court with Lucrezia often called upon to bear requests to him or mediate disputes.  She was “a font of charity” emerging as a focus of popular reverence and possessed an understanding of patronal politics that gave an additional advantage to the Medici regime.

After her husband’s death in 1469, she took charge of the extensive Medici holdings and by 1480 had added a palazzo, farm in Pisa with a house, several commercial properties, a house in Florence and a spa at Bagna a Morba whose waters had been popular with Florentines for over a century but had fallen into disrepair.  She personally supervised the spa’s renovation working with engineers installing a hydraulic system to run into baths and showers making it a fashionable resort.

Her abundant surviving correspondence reveals her to have been a patron who exercised indirect political authority and pursued the interests of women, humble people and the religious.  She wrote sonnets, plays, religious poems and sacred narratives, was an accomplished businesswoman, a significant patron of the arts and religious institutions and was known as the ‘Queen Mother of Florence’.  Upon  her death her son Lorenzo the Magnificent wrote of his mother “I have lost not only a mother, but the only person I could turn to in many vexations and who aided me in many troubles ... an irreplaceable refuge”.  Lucrezia demonstrated that women were as capable as men of participating fully in every aspect of social, financial, political and cultural medieval life.  She was grandmother of two popes and great-great grandmother of Catherine de’Medici, Queen of France.
Map of Florence, Italy
References and Further Reading
Proudly powered by Weebly