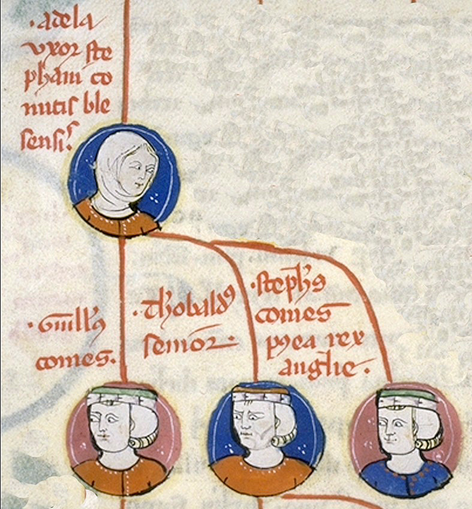 ​
Youngest daughter of William I, the Conqueror and Matilda of Flanders, wife to Stephen III of Blois.  Adela was born with royal blood on both sides giving her particular prestige.  Shortly before her fifteenth birthday she married Stephen who was at least eighteen years her senior with a dowry consisting of moveable wealth, castles, estates, and a forest across her husband’s domains.

Adela inherited her father's strong will and interest in politics taking an active role in the administration of her husband’s lands becoming a noted power broker renown for wealth and generosity which she prudently distributed.  When her husband became Count of Blois, Chartres, and Meaux in his own right, she participated in all nonmilitary aspects of lordship, serving as a virtual co-ruler alongside him.  Adela developed a cordial relationship with Bishop Ivo of Chartres promoting peace between the laity and clergy.
​Existing Public Record Office records and a letter from Baudri, abbot of Bourgeuil ca 1107 provide a unique description of her personal chamber.  “The walls are covered with tapestries, woven according to her design, and all seem alive: on one wall, creation, the fall and fratricide, the flood with fish on mountain tops and lions in the sea; sacred history from Noah through Abraham, Jacob, Joseph, the glory of Moses, and David to Solomon on a second wall; the Greek gods and myths, ...and Roman kings on a third; around her bed the conquest of England, William’s claims to the throne as Edward’s chosen successor, the comet, the Norman council and preparations, the fleet, the battle of Hastings with the feigned flight of the Normans and the real one of the English, and the death of Harold. On the ceiling, the sky with its constellations, the signs of the zodiac, the stars and planets described in detail. On the floor, a map of the world with its seas, rivers, and mountains, named along with their creatures, and the cities on the land masses of Asia, Europe, and Africa. The bed is decorated with three groups of statues, of Philosophy and the liberal arts, the quadrivium (music, arithmetic, astronomy, geometry) at the head of the bed, the trivium (rhetoric, dialectic, and grammar) at the foot. The third group represents medicine, with Galen and Hippocrates, the humors and physical characteristics, herbs and unguents”.

Adela was particularly close to her younger brother Henry who later become King Henry I of England, even supporting him against their oldest brother, Robert.  As regent she earned  a reputation for diplomacy, skilled negotiator and promoting economic growth supporting a range of religious communities, leper hospitals and worked to reform monasteries.  Many of her pious bequests had important  economic, political and spiritual benefits. An avid  patroness of the arts, Adela corresponded with such dignitaries as Hildebert, bishop of Le Mans and Abbot Baudri of Bourgeuil, both of whom wrote poems dedicated to her.  She ruled  Blois for five years until she formally conferred authority to son Stephen yet continued to maintain power and influence until her death.  Her letters include those to  Bishop Ivo and their shared jurisdiction, Anselm of Canterbury in gratitude for hosting him in exile and negotiation a truce for him with her brother king Henry in addition from her husband and his experiences on the crusade.
Map of England and France 1152-1327