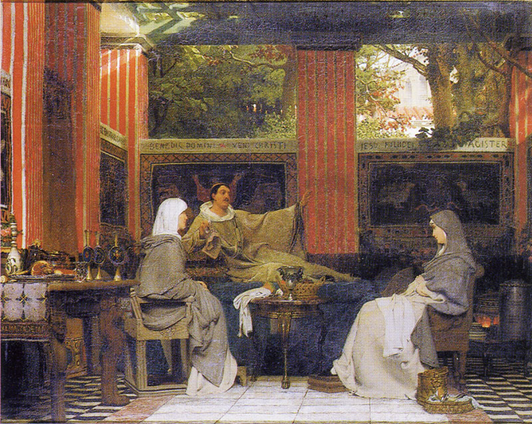 Daughter of Berthar, king of Thuringia, was one of several consorts to king Clothaire I of France and mother of king Chilperic I of Neustria.  Born a Thuringian, as a Germanic princess Radegunda was brought to Francia as war booty and bride for king Clothar I.  About 550, she persuaded her husband to let her found a monastery, Holy Cross at Poitiers, and became its abbess.  While in the monastery she continued to hold the title of queen of the Franks yet distinguished herself with acts of conspicuous self-humiliation such as cleaning the latrines.  Her royal status combined with literacy enabled her to make her voice heard in domestic, political and church affairs,  influencing  the Frankish kingdoms.   Radegunda was also interested in medicine believing  in washing the patients and personally caring for the poor, sick and lepers, founding a hospital at Athies for indigent women.

Educated in Latin, rhetoric, writings of the church Fathers and the lives of female martyrs and saints Radegunda was a prolific writer authoring an epic lament on the destruction of her Germanic homeland, the Thuringian War, an elegy on a cousins murder, Letter to Artachis, in addition to numerous letters to kings, emperors, and bishops including Venantius Fortunatus, bishop of Poitiers advocating peace.  She corresponded in Latin with Abbess Caearia of Arles and various bishops in connection with her administration of the monastery.   Through her correspondence and mediation with the Byzantium emperor Justian II, nephew to Justian I and empress Theodora, she secured the gift of a jeweled reliquary containing a piece of the holy cross which still survives today at her functionary monastery in its sixth-century reliquary.  Her most influential letter, Letter of Foundation,  was written at the end of her life and explains her reasons for establishing a community for women and obtaining the Rule of Caesarius, the first rule written for it’s governance of religious women requiring every member to learn how to read and write.

Upon her death she was embalmed with herbs and spices wrapped in a linen shroud, initially buried outside the city walls of Poitiers but the documented laments of the nuns who were not able to tend her grave since they were not allowed to leave their monastery led her tomb to be eventually relocated to a church within the city walls where it became known as a site for miraculous healings.  Two biographies were written about her life, the first in 600 by her friend Fortunatus, Life of St. Radegund followed about a decade later by a nun of Holy Cross Monastery Baudonivia who wrote The Life of St. Radegund.    She is one of the best known Frankish queen/saints from early Middle Ages.
Map of Thuringi & Franci