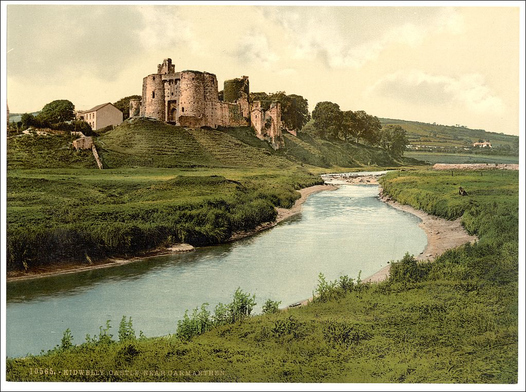 Gwenllian often depicted with sword in hand or riding a chariot into battle in the style of Boudicca was the daughter of Gruffudd ap Cynan, consort to Gruffydd ap Rhys, Prince of Deheuarth, parents of Rhys ap Gruffydd, known as “The Lord Rhys” one of the most successful rulers of Deheubarth during this period.

In 1113, Gruffydd visited Gruffudd ap Cynan, Prince of Gwynedd who owed a debt to Gryffydd’s father for his help in 1081 reclaiming  Gwynedd from rivals.  During Gryffydd’s visit he met Gwenllian, Gruffudd’s strikingly beautiful youngest daughter.  After a brief courtship the couple eloped returning to his family seat at Dinefwr in Deheubarth.  Deheubarth was an area struggling against the Norman invasion in South Wales.  While the conflict between the Normans and the Welsh continued, the princely family were often displaced, with Gwenllian joining her husband in mountainous and forested strongholds, participating on his military campaigns including the retaliatory strikes, aka "lightning raids" against Norman-held positions.

Henry I’s death in 1135 presented an opportunity for the Welsh to recover lands that were being held by the Anglo-Norman lords who were unable to dedicate resources to counter their efforts because of the ensuring civil war in England between Stephen of Blois and Matilda.  In 1136, Gryffdd joined  in a rebellion against the Normans settlers supported by the native nobility of the so-called middle March (lands along the central midland border between England and Wales), invading Ceredigion, burning and destroying Norman settlements and castles.   Later that same year Gruffydd again participated in a second invasion on the Norman stronghold at Cardigan culminating in a Welsh victory.   While Gruffydd was away from home a rebellion erupted around Cydweli (Kidwelly) castle which was under the control of Maurice de Londres Gwenellian summoning additional forces, including her young sons Maelgyn and Morgan, launched an attack where her army was routed and she and her son Morgan were captured in battle and beheaded.  Gwenllian’s “patriotic revolt” and subsequent death contributed to the Great Revolt of 1136.

12th century Gerald of Wales, a Cambro-Norman archdeacon and historian wrote how Gwenllian rode forth at the head of an army ’like some second Penthesilea, queen of the Amazons’.  Gwenllian is the sole Welsh woman known from surviving records to have entered the martial area.   A spring where she died was  named after her and for centuries to follow Welshmen cried-out “Revenge for Gwenllian “ going into battle.  She was 3 times great granddaughter to Brian Bouruma mac Cennetig, High King of Ireland.
Map of Wales
​References and Further Reading
Proudly powered by Weebly