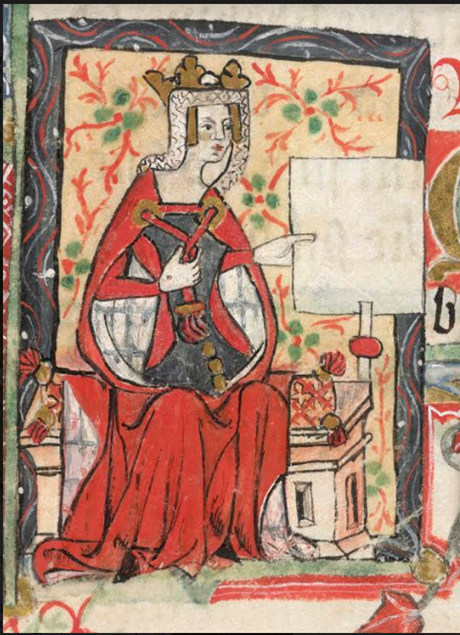 
Daughter of Henry I Beauclerc of England and Matilda of Scotland, wife to Henry V, Holy Roman Emperor, secondly to Geoffrey Plantagenet of Anjou.   Eight year old Matilda was sent to Germany to be educated betrothed to Henry V, emperor of Germany.  After her first husband’s death in 1125, she returned to her father’s court who, having lost his only son William in 1120, made Matilda his successor.  Henry concerned about a woman being accepted as his successor called all his nobles and prelates together more than once to swear fealty to her.  With Henry’s guidance Matilda married secondly fifteen year old Geoffrey Plantagenet of Anjou in 1128 and upon her father’s death in 1135 she became the heiress of all his dominions in England and France.   Matilda was in Anjou when her father died and her cousin, Stephen, Earl of Blois, took advantage of her delay seizing the crown of England three weeks later.  The barons of Normandy submitted to Stephen but his administration soon became unpopular.  Hearing of her father’s death Matilda immediately entered Normandy to claim her inheritance but faced opposition from the Norman barons.  It took four years for her to gather supporters and in 1139, Matilda invaded England as the supreme commander of the army to claim her throne from the usurper while Geoffrey remained in Normandy to win a heritage there for their young son Henry.
After Matilda returned to Normandy in 1148, which was being held by her husband, their eldest son continued the campaign in England and eventually succeeded to the throne as Henry II in 1154, she ably performed her duties as regent during the first few years of his reign.  Particularly in the early years of her son's reign she provided political advice and attempted to mediate during the Becket controversy. Matilda worked extensively with the Church, founding Cistercian monasteries, and was known for her piety. She was buried under the high altar at Bec Abbey after her death in 1167. On her tombstone it reads, “Here lies Henry’s daughter, wife and mother; great by birth, greater by marriage, greatest by motherhood.”   ​​
Map of England & France in the Reign of Henry I