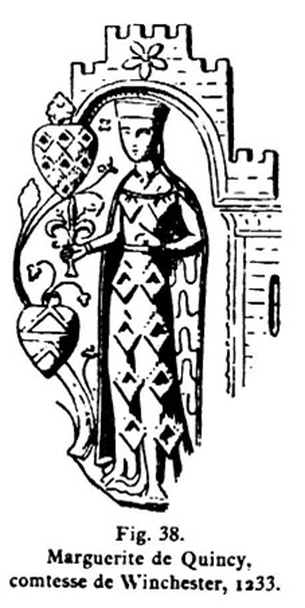 Daughter and heiress of Robert de Quincy and Hawise of Chester, granddaughter to Saher de Quincy, 1st Earl of Winchester, first wife to John de Lacy, Earl of Lincoln, Magna Charta Surety, secondly to Walter Marshal, 5th Earl of Pembroke.  At twelve Margaret married as his second wife seventeen year old John de Lacy who had already made a mark on the political scene as one of the twenty-five Magna Carta barons.  Margaret inherited, in her own right, the Earldom of Lincoln and honors of Bolingbroke from her mother and with de Lacy’s death in 1240 she controlled the estates for their son Edmund de Lacy who was still in his minority and being brought up at the court of Henry III and Eleanor of Provence.

Margaret's second marriage to Walter Marshal offered him a possible life interest in her inherited lands according to the ‘curtesy’ of England if their union produced living offspring which their three year marriage did not.  Walter’s death, supported by her close connections to the crown and its political clout, enabled Margaret to be successful in her pursuit of her Marshal dower to the detriment of her late husband’s successors.

Her adult life illustrates how it was possible for a noblewoman to exercise informal political influence through the family and friendships formed with other aristocratic women.  Margaret and Eleanor of Provence, consort to King Henry III, developed a deep friendship which both valued and carefully fostered, allowing Margaret to carve out a distinctive political role for herself in widowhood, transforming her into one of the most important and wealthy noble widows of her day.

As the widowed Countess of Lincoln she was brought into contact with some of the most important people in Lincolnshire county including Robert Grosseteste, Bishop of Lincoln, considered the most significant intellectual in England at the time. Following her second widowhood, Grosseteste  wrote Groseteste’s Rules in recognition of Margaret's position as Countess of Lincoln and “femme sole” with the  responsibility of running four manors between her mother’s barony of Bolingbroke and her own dower lands.  The guide is the earliest surviving treatise on estate and household management including topics such as agricultural management, yearly travel planning, how to command servants and the rights and responsibilities of a lord.  Grosseteste dedicated the treatise to Margaret whom he viewed as both his patron and peer, a women that has been  described as "one of the two towering female figures of the mid-thirteenth century."
Map of England & France 1152-1327 AD
​References and Further Reading
Proudly powered by Weebly