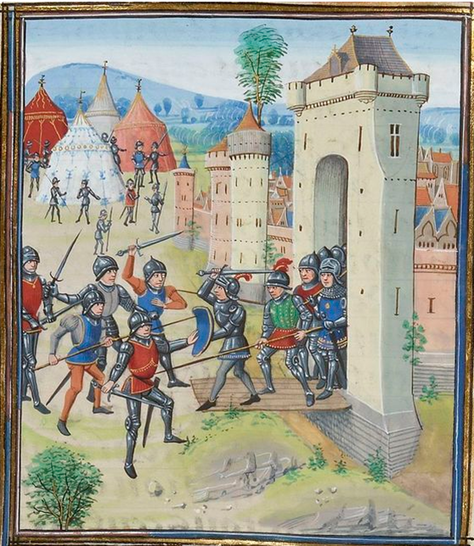 Daughter of Louis I, Count of Nevers and Joan, Countess of Rethel, wife to John of Montfort, the Duke of Brittany.  Joanna fought most of her life in defense of the rights of her husband and later their son’s dukedom of Brittany which was challenged by the House of Blois during the War of the Breton Succession,  an integral part of the Hundred Years War.  Joanna, known for her fiery personality, led the Montfortist cause with considerable skill as a military leader.

The rivalry for control of Brittany began with the death of the childless John III, Duke of Brittany.  Two families held rival claims as his successor, the House of Montfort led by John  Montfort and his wife Joanna preferred by the English and the House of Blois led by Charles Blois and his wife Joan of Penthièvre endorsed by the French.  After receiving safe conduct from the king John of Montfort went to Paris to plead his case yet was imprisoned by king Philip VI who, as an uncle to Charles, declared the Blois’ as Brittany’s true heirs. 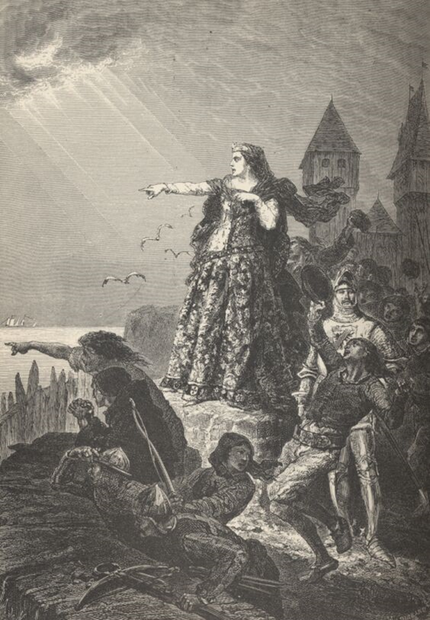 Joanna of Flanders spots English fleet arriving, 1342 CE Illus., François Guizot's, History of France, 1869 CE.
Once the Blois army realized what was happening their forces cut Joanna and her troops off from their retreat. The Bishop of Leon tried to persuade Joanna to surrender to Charles de Blois but she refused as she had just seen English ships out in the harbor courtesy of Edward III. Charles de Blois was forced to retreat for the moment although Joanna realized he and his forces would return.  She sailed to England for more reinforcements but was intercepted on the way back by Spanish ships under the command of Louis of Spain, Blois’ ally.  In a hard-fought battle the sailors and knights grappled in hand-to-hand combat as Louis' men attempted to board Joanna's ship. According to Froissart, Joanna fought in person "with the heart of a lion, and in her hand she wielded a sharp glaive, wherewith she fought fiercely".  Eventually the English forces beat off Louis's ships and sailed on to Vannes, a coastal town in north-western France, where Joanna and her troops  took over the city followed by an attack on Rennes which after a long siege was a stalemate resulting in a truce in 1343 and release of Joanna’s husband John IV who died two years later.

When war broke out again the English allied themselves completely with the House of Montfort, capturing Charles de Blois in the name of Joanna who, with her son John V, had taken refuge in England. The war continued until 1364 when the House of Montfort was victorious and their son was named the rightful Duke of Brittany.  Joanna contracted a serious mental illness and was in confinement in England never returning to France, dying in 1374.   It is believed she may have influenced Joan of Arc, another female military leader 50 years later in the Lancastrian phase of the Hundred Year’s War, and was described by  Jean Froissart, French author and court historian,  as having  “the courage of a man and the heart of a lion”.       ​
Map of Brittany, France
​References and Further Reading
Proudly powered by Weebly