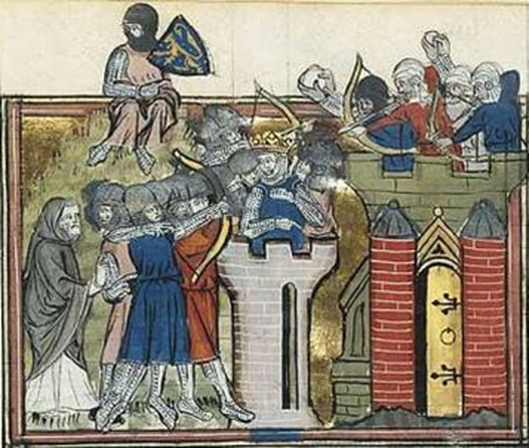 As the daughter of a Byzantine emperor Anna was well educated in astronomy, medicine, history, military affairs, history, geography, and math. Her father placed her in charge  of the large hospital he built in 1096 with 10,000 beds for patients and orphans where she taught medicine; she was considered an expert on gout, treating her own father during his final illness.

Anna was the oldest child and should have been first in succession.  After her father became ill with rheumatism in 1112 and no long able to walk he turned over the civil government to her mother Irene who endorsed her daughter’s right to the throne.  Anna and her husband Caesar Nikephoros Bryennios, son of an  aristocratic family that had contested the throne before the accession of  Alexios I, assumed the throne would be theirs as it was contended their   marriage was a political union although their forty year union produced four children.  As Alexius lay dying her brother allegedly took the emperor’s ring, declaring his right to the throne.  Anna and her mother attempted to divert the succession but were unsuccessful. During her father’s funeral there was an attempt to murder her brother John followed by additional efforts to unseat him until Anne was forced to forfeit her estates.   After her husband’s death in 1137 she entered the convent of Kecharitomene in Constantinople “Full of Grace” that had been founded by her mother, living there until her own death in 1153 becoming a nun only on her deathbed. 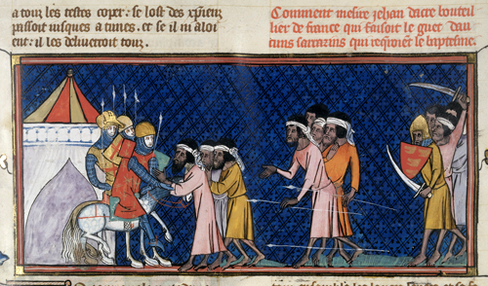 Detail of a miniature, An attack by Saracens on a Christian Camp, France, Paris © British Library Royal 16 G VI folio 442.
During her years at the convent under house arrest and in seclusion she studied history and philosophy, holding intellectual gatherings. In 1148, Anna began to write her 15 volume book, The Alexiad, which was begun by her husband and is considered the most accomplished work written by a women before the Renaissance although it followed ancient conventions and  formulas and ingeniously borrowed by The Iliad and The Odyssey. Her historical writings encompass her father’s reign and is the main source of Byzantine political history including the first Crusade providing the Byzantine reaction to the crusade and the establishment of the Latin kingdom of Jerusalem.
She was the world's first female historian writing of military, religious, medicine and astronomy and played a key role in the revival of Aristotelian scholarship.   Her contemporaries such as Bishop of Ephesus Georgios Tornikes regarded Anna as a person who had reached "the highest summit of wisdom, both secular and divine". ​​
Map of Byzantine Empire 1000-1100 AD
​References and Further Reading
Proudly powered by Weebly