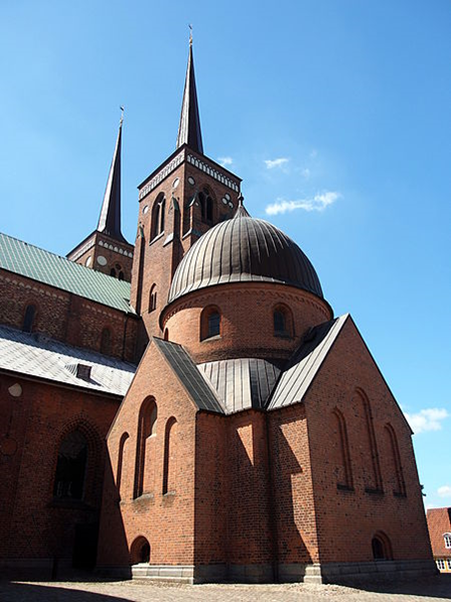 
Daughter to John III the Alchemist, Margrave of Brandenburg-Kulmbach and Barbara of Saxe-Wittenberg, consort to Christopher of Bavaria, secondly to Christian I of Denmark.  Christopher of Bavaria was crowned king of Denmark, Sweden and Norway in 1443.  Christopher realizing his need for strong allies for both protection and expansion arranged a marriage to Frederick VI, Elector of Brandenburg’s granddaughter Dorothea.  The marriage ceremony was described as the most elaborate in Nordic medieval history, followed by her coronation as queen of the three kingdoms.

King Christopher granted her an annual income of 20,000 fl. from each of 3 kingdoms plus his German possessions giving her an enormous income.  His death five years later and childless immediately created a succession crisis, breaking up the three kingdoms that had formed the Kalmar Union.  The councilors, realizing payment to Dorothea would place the a king under an economic burden decided they could reduce the cost if she were to marry the next king.  Aware of her key role Dorothea used the situation to increase her own political power ruling Denmark independently until the councilors presented her a list of possible marriage candidates ultimately choosing the one she could most easily control, Christian I from the house of Oldenburg and in 1449 they were married.

Determined to reunite the Kalmar Union, Dorthea spent several years campaigning among Swedish clerics, nobility and ultimately, in 1455, the pope himself.  Her campaign was approved In 1457 and she and Christian ruled a reunited union.  Her powerful influence was demonstrated on the most important documents bearing a seal 'Done by the king himself, in the presence of the queen’.   In 1479, during a visit to Pope Sixtus IV Dorothea requested and was granted a founding privilege for a University of Copenhagen consisting of four faculties, Theology, Law, Medicine, and Philosophy. 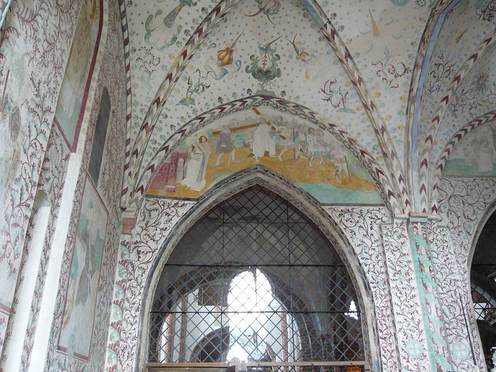 Jesus carrying his cross on Via Dolorosa, Way of Sorrows, (a street within the Old City of Jerusalem, believed to be the path that Jesus walked on the way to his crucifixion), Gothic fresco in the Chapel of the Magi where Dorothea and Christian are buried © KDLarson CC BY-SA 3.0.
Dorothea had great personal wealth and influence, ruling during the king’s absence and after Christian’s death in 1481, remaining politically active during her son John King of Denmark’s reign until her death in 1495.  She was also the mother of Frederick of Denmark and daughter Margaret of Denmark whose marriage to King James III of Scotland was arranged with a recommendation from Louis XI, king of France, in an effort to end a 34 year conflict between Denmark and Scotland over the taxation of the Hebrides.  Her father Christian agreed to a considerable dowry. However, being short of cash he pledged the islands of Orkney and Shetland, possessions of the Norwegian crown, as security until the dowry was paid. In 1472, the Northern Isles were directly annexed to the Crown of Scotland. ​
Queen Dorthea and Christian I are buried in Chapel of the Magi (Christian I’s chapel)  Roskilde Cathedral, in Roskilde on the island of Zealand in Eastern Denmark.  The current cathedral, which has become the main burial site for Danish monarchs since the 15th century was rebuilt in 1443 after a fire destroyed most of the city, damaging a 12/13th century cathedral that had been built over an earlier 11th century site.  ​
Map of Sweden circa 1658
​References and Further Reading
Proudly powered by Weebly